This review will only contain three books as one of my reviews is quite long.

The Ballad of Songbirds and Snakes by Suzanne Collins 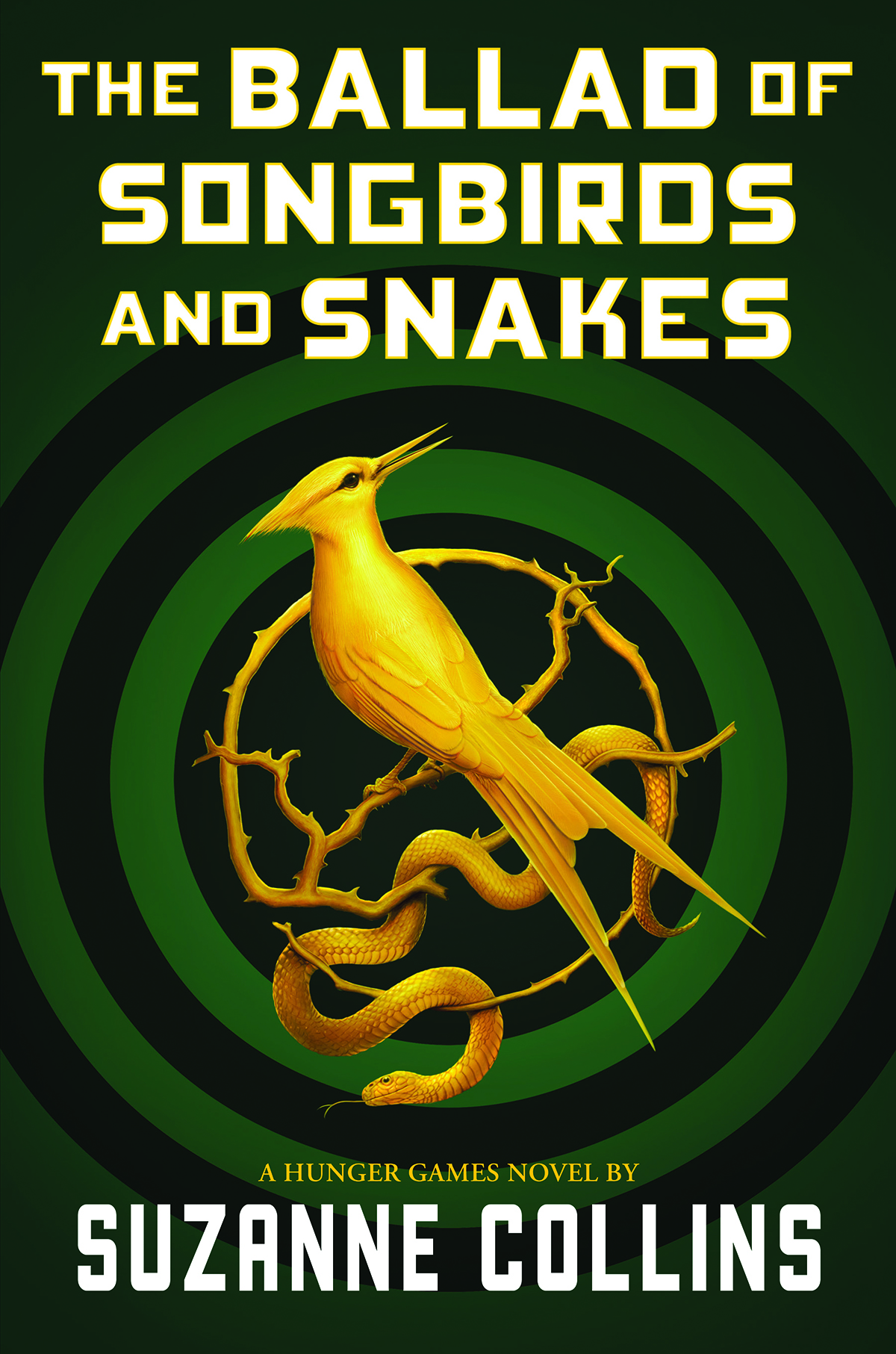 Warning: This book contains themes of murder and body horror throughout.

Summary: In order to save his family fortune, a young Coriolanus Snow puts his name into consideration to be a mentor for the tenth Hunger Games for the monetary prize and status. Snow must navigate relationships with his fellow mentors, plotting professors and his charismatic tribute from the doomed District 12.

Thoughts: As a huge fan of the original trilogy, I have a lot of thoughts on this book. I read the original trilogy (I’ll just refer to it as OT from now on) in high school so it’s been a while but I was quite shocked when they announced a prequel, a President Snow origin story nonetheless. It was the last thing fans expected but I tried to keep an open mind going into it.

Obviously, I kind of hated it. Like many other books I rate 2-stars, I feel I could have written something better myself and my frustrations with the book well outweighed my enjoyment. There was a lot to live up to as the OT is one of the most popular young adult series of this generation and the author ultimately fell short. There were a dozen different directions the plot could have gone and ways characters could have been better fleshed out that I could think of only at the top of my head.

The first half of this review will be spoiler-free, the second half will not. The spoiler-free half will only contain plot points described in the GoodReads summary and general themes. You will have a very obvious warning before the transition. Now, let’s dive in.

The constant thoughts of “Who asked for this? Do we really need this? What is she trying to do with Snow? I much have preferred a [literally any other character, but mostly Haymitch] origin story” kind of ruined the reading experience for me. Some people might say they won’t compare it to the original trilogy, but I couldn’t disagree more. This book was meant to explain the whole foundation of the Hunger Games under Snow (I refuse to call him by his God-awful first name and somehow even worse nickname “Coryo”) in the OT. I felt at some points it even lived quite relentlessly in the OT (we get it, Snow smells like roses and hates mockingjays). Rogue One is my favorite (new) Star Wars movie because it filled a hole, maybe not a hole we know needed filling (wow, I really need to stop saying “hole”), but it worked. This book did almost nothing I assumed it wanted to do regarding the Snow character. In fact, it might have even done a disservice by attempting to explain his character and failing for me.

First and foremost, I had a problem with the pacing. I like the writing but when something gasp-worthy happened it seemed to happen abruptly and was quickly moved on from, almost never to be dwelled on. There was a lot of trauma in this book that could have been better harnessed for character (particularly Snow’s) development. The last few chapters and epilogue was so sudden and convenient it gave my whiplash but honestly at that point, I welcomed a fast ending to put me out of my misery. Reading this book felt like following a trail of breadcrumbs: enough to keep me going to the next chapter but not fill me up.

Let’s talk more about Snow’s character development (or lack thereof) which was this book’s main goal as a villain origin story and compare it to Star Wars and Harry Potter. In the Star Wars prequels, we can clearly map out a sequence of traumas and see how the pile-ons affect a good-intentioned Anakin Skywalker as he descends into evil and ultimately becomes Darth Vader. In Harry Potter, we have no shadow of a doubt that Lord Voldemort was dark and twisted from a young age. In my eyes, these are two very different but well-done villain origin stories. Now, where does Snow lie in these? In theory, I suspect the author was going more for a Darth Vader arc but in reality, Snow is left in limbo with a turn to sudden to even register.

At first, Snow is just a dude that they tried so hard to oppress. Although a lot of his issues are based on his family’s increasing lack of money, it hardly affects him outside his home besides being a little hungry sometimes. The author also tried to compare his plight of being a mentor with teachers watching him to being a contender in the Hunger Games: literal death sentence. His problems didn’t seem big enough to merit the villain he ultimately became. Once he became a mentor in the Hunger Games, he just came across as arrogant more than evil. He doesn’t seem malicious, just didn’t want to challenge the status quo of the Games even with the special relationship he developed with his tribute. Like I said in the pacing bit, even when something traumatic happened it rarely stuck with Snow in any meaningful way. So for most of the book I stand by that he might have been a bit of a bastard, but still just a dude. I couldn’t hate him, like him or even like hating him because I had no idea what the hell was going on. For a largely character-driven novel, a lot more could have been refined. Long story short, Kat puts it perfectly in her review: “I was surprised by what a passive protagonist he was for the majority of the story, and he lacked the detail and nuance that would have made this a compelling character study.” There’s just so much to unpack with this horrible character development let’s just throw the whole suitcase away and move on.

Okay, now on to the spoiler bits. This is your first and final warning. The rest of this review will contain spoilers.

If you haven’t read the book but want to know what’s going on, read a full synopsis here.

One of the few things I liked about this book was seeing the Hunger Games and tribute accommodations in a more primitive state, but there were still some things I would have changed. First of all, Lucy Gray was the only tribute we got to know so I didn’t feel anything when the other tributes died and didn’t suspect anyone else would win even for a second. I also felt the two District siblings were an interesting angle that I wish was explored more. Other unrelated thing I’d change about the book was perhaps making the story from the point of view of another mentor. The stakes are so low for Snow because we know he’ll come out in the end but having it from a different perspective would have been more enjoyable and kept us on edge as the OT did.

The relationship between Lucy Gray and Snow had me verbally saying, “Oh, hell no.” The OT showed us it was possible to develop significant platonic relationships between tributes and mentors (Katniss with both Haymitch and Cinna). The romance was really forced and highly inappropriate, it was probably the point where the book was starting to lose me and the fact that the rest of the book largely revolved around it had me seething. It even made a large part of the book seem soap-opera-y, with large focus on the relationship, Snow as a jealous lover and simply biding his time until he gets to see Lucy again. I wish the relationship had gone literally any other direction than it did. For example, Snow realizing he only romanticized Lucy Gray because she was his ticket for a scholarship and notoriety. Or after all this time Lucy Gray was only manipulating Snow for sponsors (see what I mean when I say I could have written it better myself?).

Other adaptations: An adaption is underway from the same director as The Hunger Games movies.

The Devil in the White City by Erik Larson

Warning: This book contains mention of body horror and abortion and themes of murder.

Summary:  A story of two men in late 1800s Chicago: architect Daniel Burnham is designing the World’s Fair on a deadline to rival that of Paris’s. The technological innovations of the fair such as alternating electrical currents and the invention of the Ferris wheel and notable entertainers awed the public and the famous with attendance amounting to over 27 million visitors in less than half a year. Meanwhile, serial killer Dr. H. H. Holmes preys on the attendees of the fair staying at his hotel, from credit card and life insurance fraud to murder.

Thoughts: This book incredible. It’s one of those true crime stories that make you think, “This can’t be real.” I had no idea the Chicago World Fair had such a huge impact on culture today and that H. H. Holmes was basically the American Jack the Ripper. I have no idea why they don’t teach is stuff like this and the story from Killers of the Flower Moon in school, it’s both historically significant and interesting. I’ve read several other books that take place in this time period and greatly enjoyed them and this book is no exception. If you’re thinking about reading it, pick it up now.

Other adaptations: It appears there’s a Hulu series in the making executive produced by Leonardo DiCaprio and Martin Scorsese. They seem to take to these true crime adaptations (see Killers of the Flower Moon) like Reese Witherspoon takes to contemporary domestic dramas (Big Little Lies, Little Fires Everywhere, and more).

A Good Girl’s Guide to Murder by Holly Jackson

Medium used: E-book and audiobook (purchased from Amazon Kindle store and borrowed from library via OverDrive)

Summary: For a school project, Pipa looks into a five-year case of a missing (now assumed dead) girl and the subsequent apparent suicide of her boyfriend who has been widely accepted as her murderer.

Thoughts: This was the typical young adult mystery book in my opinion, nothing “wow.” Perhaps because it’s been a bit overhyped for me. I predicted one of the guilty parties about halfway though, but it was still an interesting and entertaining story with a lot going on. The two mediums kind of confused me: starting with the audiobook, although it took place in the U.S., the characters would end their text messages with an “x” kiss and ask how they took their tea. Then I realized the author is British and the book book took place in the U.K. and had consistent cultural backdrop. I don’t know why Americans insist on making everything for them, it takes about 4 seconds to Google what a Jaffa cake is. Also, I really hated the implied feelings between Pip and Ravi, it felt really forced.

Other adaptations: The rights have been bought by a British media company.