Two little announcements before we proceed: at the end of some reviews, I’ve added a link to similar books I’ve read, enjoyed and reviewed on this blog if applicable. Enjoy! 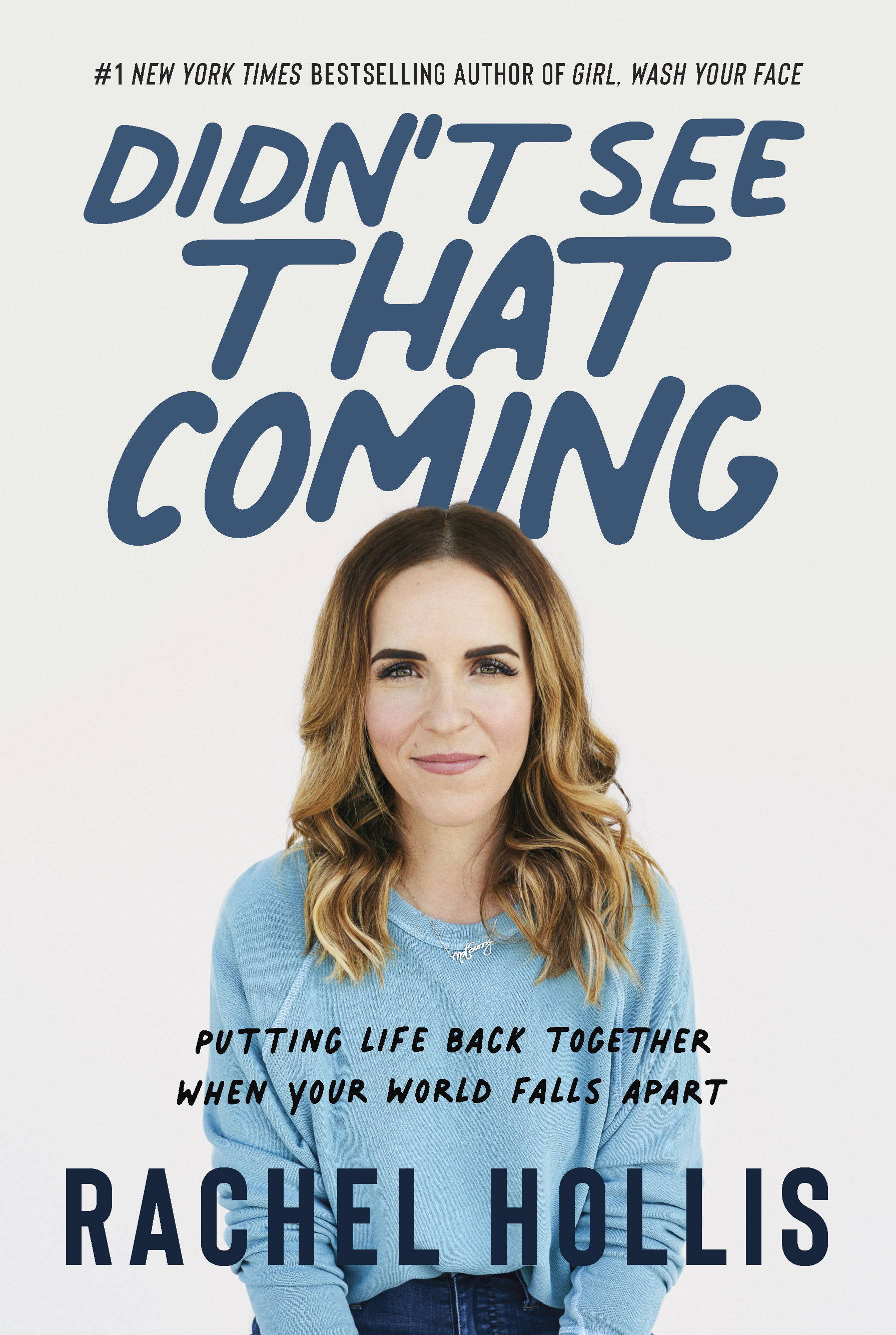 Summary: “When it comes to the “hard seasons” of life—the death of a loved one, divorce, loss of a job—transformation seems impossible when grief and uncertainty dominate your days. Especially when… no one asks to have their future completely rearranged for them. But, as Rachel writes, it is up to you how you come through your pain—you can come through changed for the better, having learned and grown, or stuck in place where your identity becomes rooted in what hurt you. …Hollis shares how to embrace the difficult moments in life for the learning experiences they are, and that a life well-lived is one of purpose and focused on the essentials. This is a small book about big feelings, inspirational, aspirational, and an anchor that shows that darkness can co-exist with the beautiful.”

Warning: This book contains a graphic description of suicide.

Before we begin, a few notes: I will reference the other books Girl, Wash Your Face and Girl, Stop Apologizing with the acronyms GWYF and GSA respectively. I expect to use these quite a bit as let’s face it, they’re all so similar and a lot of my issues with her brand have already been dissected in those reviews. I also read the book and wrote this review before watching the much-anticipated review by Savy, but I got a lot of supplemental ideas from their video. If I take supplemental or new ideas from them, I will quote it and put the time stamp from the video in parenthesis.

Now, let’s get started. I’ll start by saying some nice things about this book. I really liked the chapter about not questioning your suffering… until she made her example of exceptional courage a group juice cleanse (sigh). I was also really optimistic about the premise of the book. We all have struggled at some point in lockdown and this year I also lost my boyfriend’s dad and great uncle and was hoping to at least get something from this book.

There were no overarching issues to this book that weren’t found in the other two, so here are how previous issues manifest themselves in this book:

Now, problems unique to this book: this book had especially endless metaphors, it was exhausting. Augustus Waters is quaking. The only useful one was the paint metaphor I mentioned earlier. And most of the metaphors aren’t even good. In fact, this one metaphor (Grief: the ball and the box) I saw on Twitter is far better than anything Rachel wrote combined.

She mentions a few times of her writing getting “ridiculed” and that any criticism is a kind of misogynistic personal attack and she never reads the comments or reviews on her work. How will you ever grow? You won’t, which is probably why you’ve written the same book three times now. I know it’s hard to take constructive criticism from a topic so personal but GGGGG (good God girl, get a grip [hey, maybe that should be the next book title {Rachel, God as my witness, if you take that from me you will be hearing from my lawyers}]).

In her past books she has said a lot of things along the lines of “I work harder than anyone you know.” She has an insane work ethic (probably to a fault) so I won’t confirm or deny this, not that it’s a competition in the first place. But in this book she said, “I read more books than you can imagine”… oh, really? I read over 100 books this year Rach and know several others who have read more, how about you? If you really want to get competitive, I promise you’ll lose that game. Not everything is a competition.

Rachel’s advice on never letting your children know you’re stressed or upset also didn’t sit well with me and Savy put a finger on it well. Of course parents shouldn’t be emotionally dependent on their kids but also shouldn’t fake their emotions. That might send the wrong message to the kids to hide their emotions too and lead to unhealthy coping mechanisms (59:00).

As a millennial, I am constantly reading the same three (useless) tips on how to save money that Hollis regurgitates: to cut out Starbucks, Netflix and your iPhone. The Starbucks thing I might be able to get behind if you truly drink it in excess (more days than not), but the iPhone and Netflix thing are certified bullshit. Let’s do the math: a new iPhone costs about $800 and you can get an average monthly plan for data and to pay for the phone itself in instalments of about $30/month (looked at from AT&T). These plans are usually for 30 months but I personally use my phone as long as I possibly can which has been around four years. Just a service plan for a phone has usually only cost me personally $15/month. So on average, $270 a year is not the difference between financial ruin and success. Hell, that’s probably half of one month’s rent in a lot of places. Same goes for Netflix. I can promise you people who can’t spare $40 a month for these services already don’t have them. Rachel did have humble beginnings coming from a low-income family and working her way into social media fame but she’s been in the clouds for so long her material comes across as really out of touch (23:35).

This is the moment I’ve been waiting for: the MLM tie-in. Also in the bit on personal finance, Hollis encourages the readers “figure out a way to make more income that doesn’t cost you any money to start.” As most MLMs require an initial “investment” this is surely a nod to her previous MLM endorsements like speaking at conferences and praising the “community” three times in GSA. Is this all she’s going to say about it? No other accountability? You preached the goodness of the community and business model to hundreds of thousands of people. We’re waiting, Rach.

Another moment I’ve been waiting for: her divorce. As I was wrapping up my GSA review, Hollis announced her divorce. I mentioned that over the years, “she made her life (including marriage) advice her business and when it seems to end abruptly, people who have “bought” her products (books, podcasts, blog posts, conferences) feel cheated.” At the beginning of this book, she said that she won’t cover a lot of the specifics about her divorce as the manuscript was finished when they parted and she was still processing it (I guess she needed material for her fourth book), which is fair enough. However, in each and every one of her books she has literally said things like “my work has always been honest” and makes her brand of relatability for a lot of people and fans are well within their right to feel manipulated. If her work is as honest as she claimed, she should have talked more about what led up to the divorce and how on earth she could ethically dish out marriage advice when hers was falling apart. She is upset that people are upset with her and while this is a tough time, you were the one who chose to make your life so public.

Let’s face it: all Rachel’s books are the same recycled crap. I don’t hate the woman and I continue to read these books because I don’t think she’s a bad person or a bad writing and hope she improves but adding some kind of substance to her massively popular books, but she continues to let me down.

The Body: A Guide for Occupants by Bill Bryson

Summary: Bryson goes from head to toe describing the body’s functions and history of discoveries that led us to understanding (or not) the skin we’re in today.

Thoughts: This was a relatively digestible (pun intended) read to understand the human body. Although I’ve taken some biology classes it’s been at least five years since learning about these processes. This book was concise in its description of the bodily functions and I especially enjoyed the discovery history and fun facts within. Basically, we don’t know a lot of things about the body, but next time your coworker makes some outlandish claims about its functions, you can dispute it. I enjoy a non-fiction book like this that’s equal parts factual and entertaining and whimsical.

Similar reads: The Mystery of the Exploding Teeth and Other Curiosities from the History of Medicine by Thomas Morris

Men Explain Things to Me by Rebecca Solnit

Summary: “Rebecca Solnit took on what often goes wrong in conversations between men and women. She wrote about men who wrongly assume they know things and wrongly assume women don’t, about why this arises, and how this aspect of the gender wars works, airing some of her own hilariously awful encounters.”

Thoughts: This is a very generous 3-stars. This book was not as the GoodReads summary describes it. The first chapter is just about what you would expect from the title (which I love by the way), but the rest of the book is just a cluster. The essay about Woolf especially lost me and had little to do with feminism. For such a short book, I didn’t enjoy most of it, there are plenty of other, better feminist texts out there. I’m not a fan of the long run-on sentences, many self-promos and relentless metaphors. Also, I completely disagree with the author’s statement “Violence doesn’t have a race, a class, a religion, or a nationality, but it does have a gender” when it’s very clear certain demographics of women (such as transgender and Indigenous women) experience much higher rates of violence. However, I did learn a few things which is why it wasn’t a total waste of time.